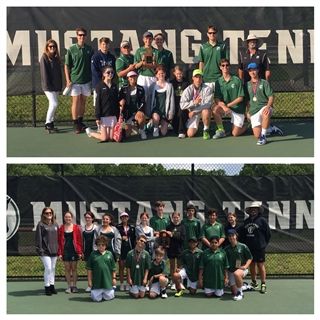 5/9/2017
On Saturday, both Middle School and Varsity Tennis teams competed in the Middle Tennessee Athletic Conference Tournament, hosted at Currey Ingram Academy. The Middle School entered as the #1 seed, while the Varsity entered as the #2 seed, having split the regular season with top-ranked Riverside Christian.
In the Middle School tournament, the Middle School team defeated The Webb School Bell Buckle in the championship match. The Mustangs dominated the match. Zara Malik and Jake Rosen were named to the All-Tournament Team and Caleb Rawson was the tournament male MVP.
The afternoon saw the Varsity team hit the courts for their semi-final match against #3 Aaron Academy. They went to the wire, earning the victory to send them to the championship match. In the championship, the Mustangs faced Riverside Christian Academy. The Mustangs pulled out the victory 5-3. The final point saw seniors Andrew Guffee and Jack Rice win a thriller in the #1 boys doubles match. Caleb Rawson and Sawyer Roark were named to the All-Tournament Team, and Jack Rice was named tournament male MVP.
Congratulations to our Mustang Tennis program! Both teams are led by head coach Ty Avolio and assistant coach Rose Champagne.
Back