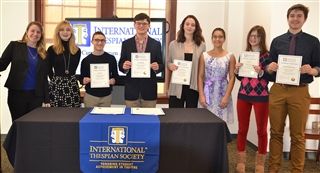 1/25/2019
Currey Ingram Academy received its official charter, Troupe 8714, of the International Thespian Society, the student honorary division of the Educational Theatre Association. On January 24, seven students were inducted into the Society at a special ceremony on campus. They are Noa Adomakoh, Owen Bigham, Caroline Keeble, Marshall Richardson, Jake Rosen, Lucy Seay, and Mary Mitchell Tucker.
“Membership in this international organization is not only a reward for the fine work you hae done, but further evidence of your desire to continue to work in this specialized field. As a troupe, your work will contribute to the growth of better theatre in this community, our country, and throughout the world,” said Marcelle Anderson, Upper School theatre director.
The International Thespian Society was established in 1929 by a group of college and high school teachers in Fairmont, WV. They named the organization for Thespis, the Greek who, according to legend, was the first actor. In honor of this early Greek playwright, all actors are called Thespians. The emblem of the Society is two masks of comedy and tragedy etched in colors of gold and blue bound together with the Thespian “T.” The guiding principle established in 1929 remains today --
Back